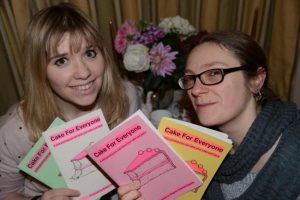 To mark the first anniversary of the Shipley Women’s March, SFZ launched a new Zine, ‘Cake for Everyone’, featuring recipes, letters, artwork, poems, essays and photography that celebrate sisterhood. 70 people attended a packed-out launch event and open mic at the Kirkgate Centre. 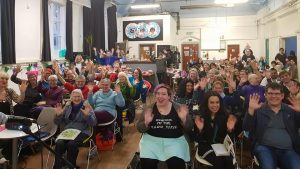 With Shipley now a marginal constituency following the 2017 General Election, it was the focus for a Labour Party #Unseat event with Owen Jones, training local people in canvassing skills and going out door-knocking. SFZ is not affiliated with any political party, but we were happy to be invited to this event in an independent capacity to run a fundraising cake stall and share our experiences of campaigning to oust Philip Davies in Shipley. 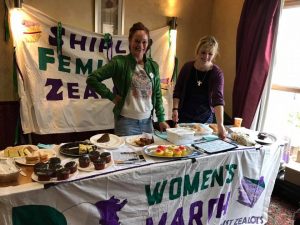 Following the General Election, we threw a sold-out Party for Hope at the Kirkgate Centre, for people in our community to come together and celebrate everyone’s hard work after a fraught, sometimes divisive couple of months of campaigning. This featured ‘Superheroes of Hope’ fancy dress, music, crafts, spoken word, cake, dancing and lots of hope for the future. 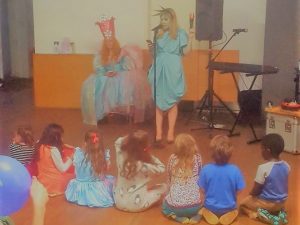 During the 2017 General Election, we organised two alternative hustings events in Baildon and Bingley (both in the Shipley constituency). These events gave undecided voters a chance to meet and chat with all four local parliamentary candidates over tea and cake, rather than sit in the audience of an adversarial debate. We also ran (fake sponge!) cake stalls and leafleted in the constituency, to raise awareness of Philip Davies’ voting record, dodgy views and issues he has filibustered. Although he was re-elected, his majority halved from 10,000 in 2015 in 4,500 in 2017, making Shipley a ‘marginal’ seat for the next election. 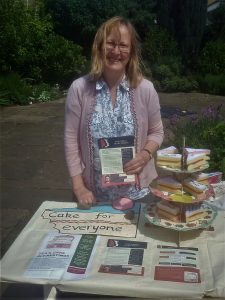 Philip Davies had invited SFZ representatives to meet with him during the Women’s March, but we had our hands full that day! Instead, we proposed a follow up public meeting with a panel of local constituents. 60 people attended this meeting at the Kirkgate Centre, to hear Shipley women challenge Phillip Davies’ views on issues such as paying the minimum wage to people with disabilities, free hospital parking for carers, sex and relationships education, the Istanbul Convention, and his rudeness to constituents in official correspondence. 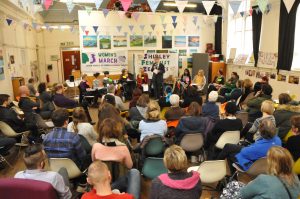 The Istanbul Convention (on preventing and combating violence against women and domestic violence) sets minimum standards for governments to meet when tackling violence against women and girls. Last year the UK Government had yet to ratify it, and Philip Davies had attempted to talk out a Private Members Bill in support of the Istanbul Convention at earlier readings in Parliament. Knowing that we could not ask our own MP to support the Bill at its third reading, we wrote to every other MP in the country. Our open letter was signed by over 100 Shipley residents, and read in the House of Commons debate by Dr Eilidh Whiteford MP, who introduced the Private Members Bill. MPs voted 138-1 in support of the Bill. 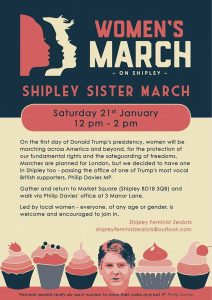 Over 1,500 people joined the Shipley Women’s March as part of a global day of  protest at Donald Trump’s inauguration, in solidarity with the Women’s March on Washington. Shipley MP Philip Davies had previously said he would “vote for Trump in a heartbeat”, so we felt it was down to us to stand up for a more positive vision for our community. The March included speakers of all ages, poets, the fabulous Resister Sisters and cake, of course! 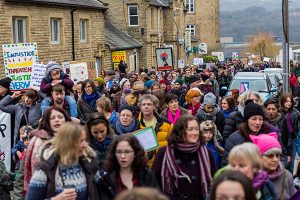 We were invited to run a cake stall at Saltaire Peace Fair, once again taking the very popular Philip Davies Tops Trump game and fundraising for our chosen charities. 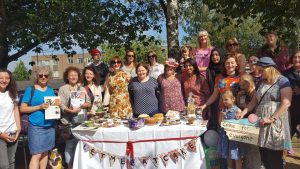 Through social media, a bunch of us decided to hold an impromptu charity cake sale for feminist zealots who want to have their cake and eat it, after our local MP said some daft things. 60 people showed up in Shipley Market Square on a sunny day in August with cakes, costumes, and music, we fundraised around £100 for our chosen charities Bradford Women’s Aid and CALM, and the idea for SFZ was born. More pop up cake stalls followed in other parts of the constituency.